Diespeker & Co has been working with Alexander Harris, Founder and Creative Director of Harris & Harris London, to create a new look for lighting using bespoke resin based terrazzo.

Harris & Harris was set up in 2013 to concentrate on furniture, interiors and products for hotels, restaurants and the home. Alexander was keen to design a collection of lighting, and in December 2015, approached lighting specialist Heathfield & Co to discuss a possible collaboration.

Heathfield & Co suggested Alexander looked at designing something out of the ordinary, and after researching materials currently being used in high-end interiors, he decided that it could be interesting to use terrazzo, a material normally associated with flooring, for the lamp bases. He was particularly interested in the recycling angle of using waste marble chippings, as well as the many possibilities for adding other aggregate, such as glass, into the mix.

Searching online he discovered Diespeker & Co and was immediately impressed by our experience and the range of work we have created around terrazzo. This included flooring for restaurant Bob Bob Ricard, which Alexander was very familiar with, having previously worked for David Collins Studio, the interior design studio responsible for the restaurant.

Confident in Diespeker’s ability to work to a high standard on prestigious projects, Alexander contacted Managing Director John Krause. John, not unusually, was ‘up for the challenge’. Alexander showed him ideas for colours and finishes that he felt complemented the brass work of the designs and John’s team mixed up an exact terrazzo sample.

The resulting prototype lights use a striking blue resin terrazzo with blue glass chippings that works superbly with the brass work to create a contemporary look with a nod to Art Deco, which is firmly based in traditional terrazzo production values.

The range comprises desk, table, floor and wall lights all with a terrazzo base, as well as a chandelier. The prototypes debuted at the Decorex International Show in September 2016 in London at Heathfield & Co’s stand.

Although the prototypes have only been manufactured in blue, Diespeker’s expertise with bespoke colours and chippings means that the Harris & Harris for Heathfield & Co lighting collection could be produced in a variety of designs and colourways to suit numerous styles of interior. 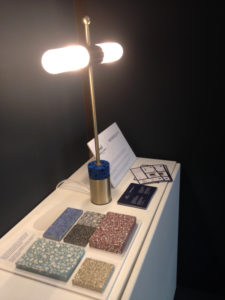 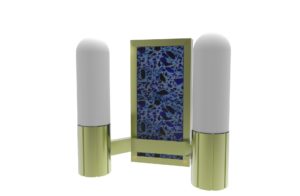