By Sophy KnightJanuary 7, 2022No Comments 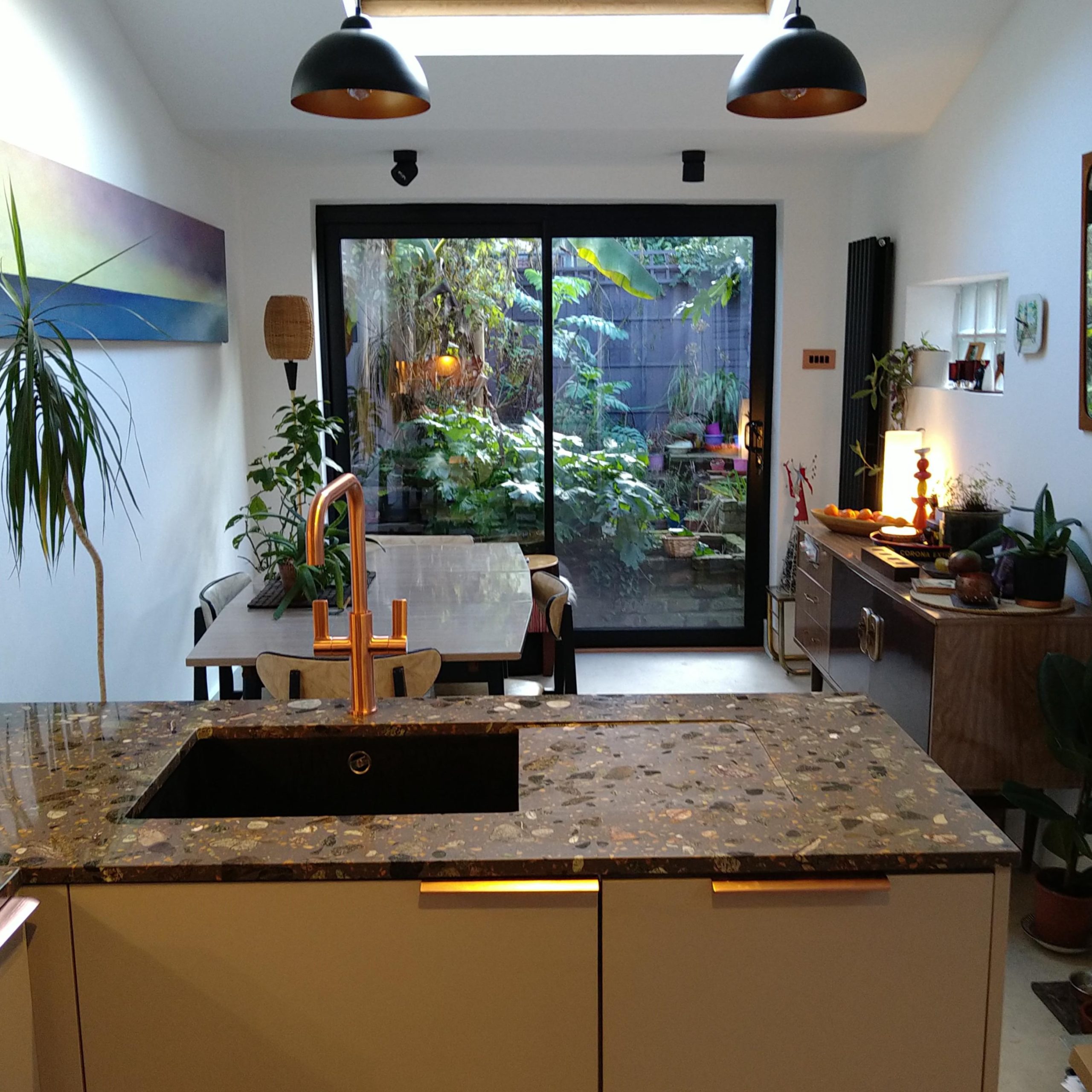 Sometimes things are just meant to be. And for one Peckham resident, the search for a new worktop brought her to Diespeker and a feeling of karma!

Sarah Pollard has been living in her house since the early 1990s. She had decided to keep the kitchen diner with its 1950s ambience (and outside loo). Thinking it was time for a makeover, she asked a friend for her opinion, and instead received a complete redesign suggestion. Rising to the challenge, Sarah planned her kitchen around a colour scheme including cashmere silk kitchen units. But although she had some ideas for stone surfaces for the worktops and a mood board to refer to, based on the colours of an original 1950s Formica covered table with browns, beiges and black legs, and the rose gold of the fittings she had chosen, Sarah had made no firm decision on the worktops.

Googling marble and terrazzo companies in the local area flagged up Diespeker. She called on a Saturday and MD John was there manning the offices as he often does on weekends. He told Sarah to come over, and she cycled the distance from Peckham to South Bermondsey. Of course, this mode of transport is much appreciated by John, a passionate cyclist himself, so it was a good start to the relationship.

Sarah says over the following weeks she visited six times and took a good number of samples with her, including a sample of green granite Verdi Marinace which was so heavy she had to go back and get her car to transport it! She was not totally convinced that any of the samples were exactly what she had in mind, and at one stage thought a bespoke terrazzo might be the way forward.

Although this didn’t quite work out, when her bespoke sample was brought to her Sarah had one of those moments of synchronicity. Although now retired, Sarah taught Design & Technology locally for over 35 years, including at Deptford Green School. And the Diespeker staff member who carried the sample out was Mitch –one of her ex-pupils! It also transpired that Head of Samples Kelly’s own children currently attend the same school. More connections were made with Senior Business Development Manager Sydney, who had trained and danced with the son of one of Sarah’s friends.

Sarah became so well-known at our factory that on one occasion John joked with her, asking if she worked here. She replied that in that case she needed her own hi-vis vest – which she was duly given. 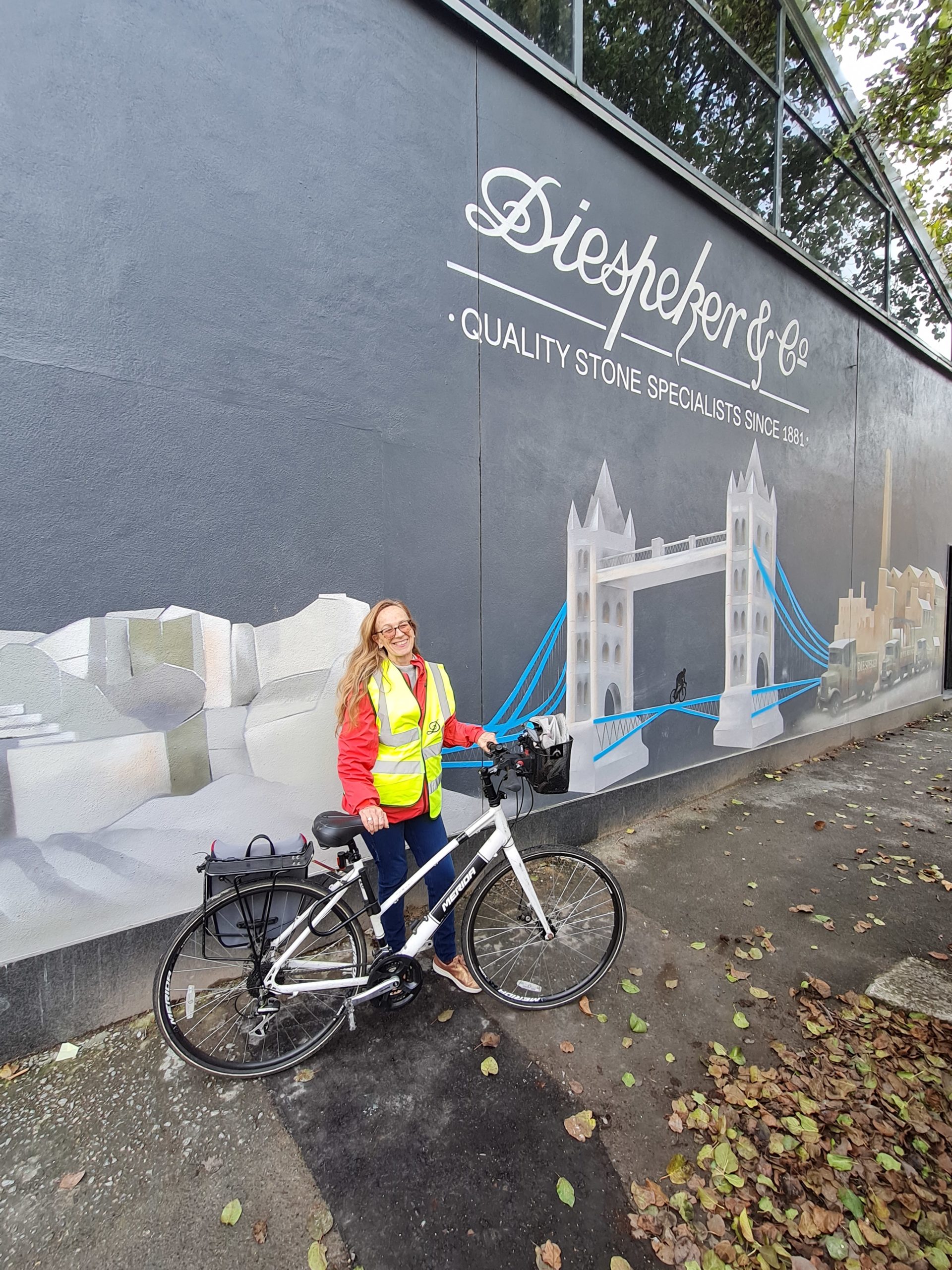 After looking at so many different designs and materials, Sarah eventually picked out terrazzo TE107 – only to learn that the stock had just been snapped up by a commercial client. Luckily another option was available, TE125. The brown-ish background with chunks of greens and orange/mustard chippings fitted the bill. Sarah visited us once again to choose the exact slab for the worktop, as she wanted one with plenty of green chunks. The team pulled out the stops to ensure that Sarah’s worktop were installed in time for Christmas.

It is always a pleasure to have a client so interested in our products and keen to visit and be a part of the process. Sarah tells us that although she had been to other companies, she felt so welcomed by our team that in the end, there was nowhere else to go!